Why decorate trees for Christmas

Christmas is the biggest holiday in the Christian world […]

Christmas is the biggest holiday in the Christian world. It wooden christmas decoration is generally believed that December 25 as Christmas may begin in the Roman Church in 336 AD. At the beginning of the 4th century, January 6 was a double festival in the churches of the Eastern Roman Empire to commemorate the birth and baptism of Jesus, that is, God showed himself to the world through Jesus. This day is also the winter solstice of the Roman almanac, which means the beginning of the recovery of all things. Perhaps for this reason, the Roman Church chose this day as Christmas. Later, due to the different almanacs used by the churches in various places, the specific dates could not be unified, so we decided to set the Christmas festival from December 24 to January 6 of the second year. Celebrate Christmas within. In many countries in Europe and the United States, people attach great importance to this festival and link it with the New Year, and the celebrations are more lively and grand than the New Year, becoming a national festival. 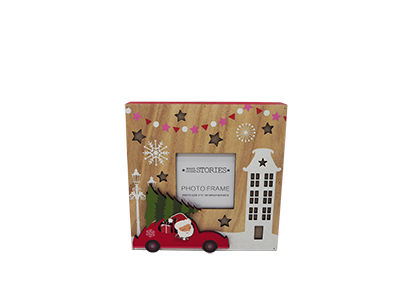 The main commemoration of Christmas Eve on December 24 and Christmas on December 25 are all related to the legend of the birth of Jesus. The origin of Santa Claus Of course, Santa Claus is indispensable for Christmas. According to the Bible record, this character is not mentioned in the book. How did he become one of the main characters of Christmas? According to legend, there was an old man named Nicholas in Bari, the Netherlands more than 1,600 years ago. He loved to help the poor in his life. On one occasion, he helped three poor girls and sent them three bags of gold to escape the misfortune of being sold. By  a Dutch missionary had spread the story of this great philanthropist to the United States, and the costume of Santa Claus gradually became popular in all countries of the world. According to the investigation, the above story still has the following; when Nicholas secretly gave one of the bags of gold to one of the women, he threw the gold through one of the windows and fell into a stocking hanging on the fireplace. As a result, the gift-giving method of putting gifts in Christmas socks has spread to the present day.

Later, the German Martin Luther put the candles on the fir branches in the woods, then lit the candles to make it look like they were leading people to Bethlehem. Today, people have switched to pink light bulbs. Another legend records. A long time ago, there was a farmer who met a poor child on Christmas Day, and he warmly received the child. When the child left, he folded a pine branch and inserted it on the ground. The pine branch immediately turned into a tree, which was filled with gifts to thank the farmers for their kindness. When the Christmas tree really appeared at Christmas, it was first seen in Germany, and then introduced to Europe and the United States. With its beautiful posture, it became an indispensable decoration for Christmas. There are many types of Christmas trees, including natural cypress Christmas trees, artificial Christmas trees and white Christmas trees.Every Christmas tree is covered with dazzling decorations, but there must be a huge star at the top of each tree, symbolizing that Dr. Three followed the star to find Jesus, and only the head of the family can put this hope The star hangs.